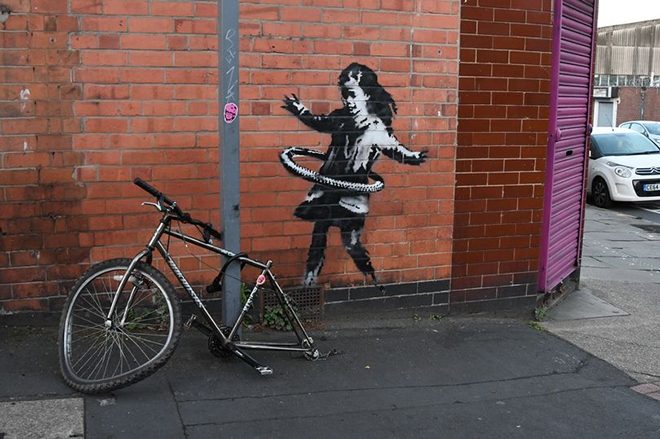 A Banksy artwork in Nottingham has been removed and people aren't happy.

Banksy's painting of a girl hula-hooping with a bike tyre was on the side of a residential building since October, but has now been bought by Essex gallery owner John Brandler, who says he's paid a "six-figure sum" for it.

Read this next: The 5 most controversial Banksy moments of the decade

Workmen apparently turned up to the building at 5am on February 17 to remove it, then loading it into a van. Brandler says it's been taken to Scotland to be restored ahead of going on show at a street exhibition at Moyse's Hall Museum in Bury St Edmunds, Suffolk.

Local resident Dan Golstein took a photo of a boarded up wall where the piece originally was. 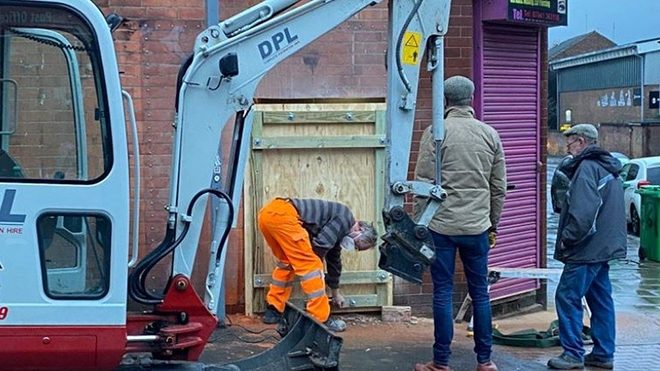 The removal of the Banksy mural made a lot of locals unhappy, as seen in tweets below.

I’m sad that the #banksy in Nottingham is not going to stay in Nottingham, it was put there for a reason. 😔 pic.twitter.com/uLo855c5ei

What a shame the Banksy artwork in Radford, Nottingham has been removed. This was a piece linking the former Raleigh bike factory with the local area. Glad I got to see it when I did. Here it is for those that didn’t. pic.twitter.com/8rYnb2awHt

Well annoyed about the Banksy piece being moved from Nottingham. Cheers lads👍

Real shame the #Nottingham #Banksy has been sold to Brandler Galleries in Brentwood. Taking from the poor & giving to the rich is the opposite of what Robin Hood stood for and indeed of what #StreetArt is all about. We still have over 30 works in #BeestonStreetArt though 🎨✌️👍

Removal of public art to private collections will soon be an all too familiar sight, I fear.

In response to people's anger, Brandler claims damp would have ruined the mural anyway.

"If you put Perspex over a picture the moisture gets into the brick wall and can't escape - the wall needs to breathe.

"If I hadn't bought it and removed it, in two years' time there wouldn't have been a Banksy there at all."

A spokesman from The Nottingham Project, which works to rejuvenate the East Midlands city, said he couldn't see Banksy being pleased with the removal after they had previously contacted Banksy's team who said they wanted it to stay where it was.

"They responded asking for the artwork to remain, so we respected the artist's wishes. Whilst we respect that this was a private decision for the landlord, we think it's a great shame that Nottingham has lost its Banksy and we hope this doesn't stop the artist coming back to the city in the future."

In December, Banksy owned up to being behind 'Aachoo!!', a mural of a sneezing lady in Bristol. A few months before that he lost the copyright to the Flower Thrower artwork he sprayed on the walls of the West Bank in Jerusalem.